Newswire is a press release distribution platform that helps clients increase their online visibility and web presence. With over a decade of experience, Newswire continues to provide premier syndication to leading news outlets. 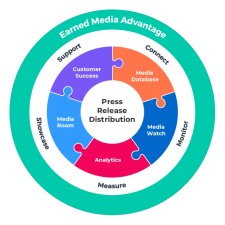 NEW YORK, February 13, 2020 (Newswire.com) - The Earned Media Advantage Guided Tour scored major wins for an e-commerce company that signed on with the program. Their personal Earned Media Advantage Strategist (EMAS) connected them with the right people at the right time, which gained them attention from People.com, POPSUGAR, and the Daily Mail, just to name a few outlets that chose to feature their story.

As part of the Guided Tour, the e-commerce company received a “customerized” Earned Media Advantage Plan which was expertly implemented by their EMAS for each campaign. When the calendar company signed on the Guided Tour, their strategist connected with them to better understand their media and marketing pain points, as well as their business objectives. Using the information collected on the call, the customerized plan was created to help overcome hurdles and increase exposure. With a plan in place, their strategist was able to send out their campaign and programs with the right message to the right audience at the right time, which landed them coverage from major entertainment media sites.

“Our strategists have direct media relationships across various industries, which we leverage to help land coverage and attention from media outlets throughout the world,” said Charlie Terenzio, Director of Earned Media Strategy at Newswire. “Combining impactful earned media coverage, along with broad press release distribution, allows businesses to drive more website traffic and improve SEO, which is the most effective way to drive sales for retail and e-commerce businesses.”

Being recognized by major entertainment news outlets has helped the e-commerce company to gain the Earned Media Advantage: greater brand awareness, increased site traffic, greater return on media and marketing communication spend, and increased sales. The calendar company is on the road to more earned media mentions, as well as increased exposure in their respective industry. Having their expert EMAS guide them helps the company reduce the time it takes to bring their product to market and increase overall business.

Discover How the Earned Media Advantage is Transforming Business today and learn how to compete in the industry.

Newswire delivers press release and multimedia distribution software and services (SaaS) that empower the Earned Media Advantage: greater brand awareness, increased traffic, greater return on media and marketing communications spend and the competitive edge. With over a decade of experience, Newswire continues to provide its customers with the ability to deliver the right message to the right audience at the right time through the right medium.​

To learn about and experience Newswire, visit http://www.newswire.com.

Get notified about new releases.